Soul Thrower - The End of Your Days 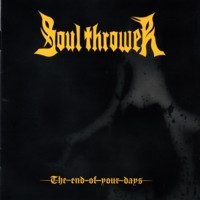 Soul Thrower’s first album (EMA-nominated) is called The End Of Your Days, and was released in 2012 on iTunes, Amazon, and other digital distribution channels. Soul Thrower was also awarded Album Of The Year by Radio Mania, and of all the local Estonian bands, Soul Thrower received the most airplay in 2012. In March 2014, the band followed up with its sophomore album,

From the Heliaed Records label, Soul Thrower is a five-person group formed in 2011 and based in Estonia. Val Tvaor co-writes and plays guitars, and Daner, an American, co-writes and sings. The songs' lyrics are all in English, and the music draws influence from Alice in Chains and Black Label Society, dripping with dark, heavy intensity, and radio-friendly melodies.